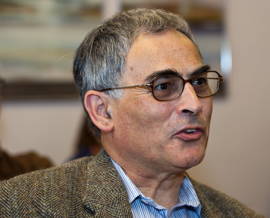 Geoffrey Samuel is Emeritus Professor in the School of History, Archaeology and Religion at Cardiff University and Director of the Body, Health and Religion (BAHAR) Research Group, and an Honorary Associate of the Department of Indian Sub-Continental Studies at the University of Sydney, Australia. From September 2012 to April 2013 he was Tung Lin Kok Yuen Visiting Professor in Buddhist Studies at the University of Toronto, Scarborough, in Canada.

Geoffrey's academic background is in physics and social anthropology. His PhD (Cambridge 1976) was on Tibetan religion and society, and based on field research with Tibetans in Nepal and India in 1971-72. Subsequent fieldwork, focussing on religion and on medical and health practices, has included several further research trips to India, Nepal, Tibet and Bhutan, and shorter visits to other Asian societies.

Geoffrey's recent research projects have included a study of Tibetan yogic health practices funded by the AHRC, a Leverhulme Trust project on Tibetan medicine, and a British Academy-funded project on contemporary versions of Tibetan ritual dance in Bhutan, as well as the Taff Project based in South Wales. He was also a co-investigator on Santi Rozario's ESRC-funded project on young Bangladeshis, Islam, marriage and the family.

Page revised 5 April 2014 by Geoffrey Samuel. Thanks to Torbjørn Hobbel for permission to use the photograph on this page.