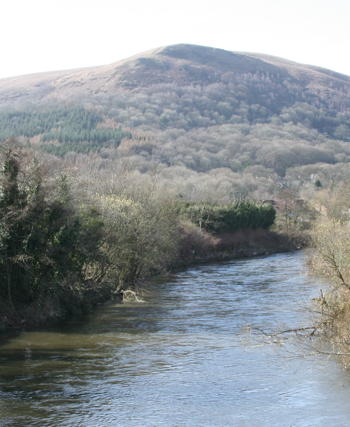 BAHAR's 'Taff Project' consists of a series of schemes by BAHAR members and friends for cultural interventions along the course of the River Taff in South Wales. The Taff rises to the north of Cardiff in the Brecon Beacons National Park, one of Britain's major tourist and recreational areas, and flows through the socially disadvantaged post-industrial regions of Merthyr Tydfil and Rhondda Cynon Taf before reaching the sea at the prosperous modern city of Cardiff. We see the river as a potential image of unity and connection between these disparate areas, and hope to awaken that potential through cultural interventions designed by and in association with people in the region.

The project began as part of an exploration of the relevance to contemporary society of mythological modes of relationship to the landscape such as those found in Aboriginal Australia, Tibet and early Europe. Aboriginal Dreaming mythologies, extensively researched by anthropologists over the last half-century, and popularised some years ago through Bruce Chatwin's Songlines, provide an intellectual model of the relationship between people, social groups, and landscape. More importantly, they imply an embodied relationship to the landscape and to the other people who are connected with it. This relationship exists at the level of feeling, emotion, moral imperatives, and ways of movement through the landscape as much as in cognitive terms. The travels of the founding beings in primal time are re-enacted in ritual, dance and song, and less spectacularly in the everyday experience of walking through the landscape.

Indications of similar ways of relating can be found in many societies; the Tibetan mythologies of Gesar and of Padmasambhava and the narratives of the Irish Dindshenchas provide instructive parallels. A series of BAHAR meetings and workshops in early 2009 explored these ideas, with a focus on the living landscape of South Wales, and the Taff river valley in particular, and led to a presentation at the Living Landscapes conference at Aberystwyth in June 2009 ('Walking Through the Sacred Landscape: The Aboriginal Dreaming as Generative Model'). In discussions at and after the conference, we began to explore how this ideas might be put into practice in contemporary South Wales.

The city of Merthyr Tydfil, once a key site of the Industrial Revolution and imtimately linked to the history of the Labour Movement in Britain, is now one of the most socially disadvantaged areas in the UK, as are many of the syrrounding towns. Communities such as this easily become drained of positive meaning and significance for many of their inhabitants, particularly for young people with the initiative and ability to seek work elsewhere. They become caught in a vicious downward spiral, in which the lack of positive value afforded to place and community means that people are increasingly discouraged from seeing the place where they live as worth staying in or caring about. 'Meaning' becomes supplied instead by the mass media with their emphasis on self-centred acquisition and consumption, or by a local culture of high adult and youth unemployment, depression, substance abuse, petty crime, etc. Merthyr and the surrounding communities retain a unique spirit of their own, but the future prospects for the region and its people are bleak.

The Taff Project aims to help reverse the downward spiral by connecting these communities into a wider set of meanings with genuine local resonance. These are based on re-visioning the Taff Valley as a single contemporary environment that stretches from the mountains of the Brecon Beacons through the post-industrial landscape of Merthyr Tydfil and the former mining communities to its south and down to the city of Cardiff, Cardiff Bay and the Bristol Channel.

At present, although linked by the river and by a cycling and walking trail along the valley, these locations are experienced in strongly contrasting ways; the tourist sites of the Brecon Beacons National Park, the depressed post-industrial regions of Merthyr Tydfil and the Valleys, the thriving and growing Welsh capital city of Cardiff. We hope to catalyse a process through which past history (e.g. Merthyr's key role in the Industrial revolution, the deeply-felt local engagement with the mines and their closure, the dramatic social and economic changes of recent years) can become integrated into a positive narrative encompassing the region as a whole, helping to counter divisive and antagonistic elements within the local cultural context (Valleys versus city, Welsh versus English versus non-UK migrants, language, religion, social class). The river itself will act as a key metaphor of connection and linkage.

There is some further discussion of this project in Geoffrey's recent public lecture in the Sydney Ideas Lecture series, Buddhism and a Sustainable World: Some Reflections, available here as a video podcast.

Specific plans so far include:

We are currently seeking finance to support these two projects. Suggestions for other projects are also welcome.

Enquries about the Taff project should be addressed to Geoffrey Samuel

Cleaning Up the Taff

The Cardiff Rivers Group (CRG) was established in 2009 as a volunteer organisation devoted to cleaning up the Taff and other Cardiff rivers. CRG is affiliated with the environmental charity Keep Wales Tidy.

Links to some other river projects