Religious Nationalism and Sustainability in the Asia Pacific Region


This three-year project, which commenced in January 2005 and ended in December 2007, was supported by a grant of A$125,104 from the Australian Research Council (2005-2007). The principal investigator was Santi Rozario; other investigators were Geoffrey Samuel, Hilary Carey, Terry Lovat, and Belinda Green.

In this project we studied the impact of new 'religious nationalisms' on women's religious life and on the wider life of their communities. Through ethnographic studies of minority women in mixed Muslim-Christian communities in Bangladesh and Australia, the project investigated ways in which women's behaviour and demeanour are being used by male-dominated political and religious hierarchies as boundary markers of religious identity from the international to the local level. We studied changes in areas of religious life linked to the sustainability and viability of family and community, often the responsibility of women and increasingly marginalized within Asian communities by new global religious forms. The project asked how women have responded to these changes, and investigated the consequences for the sustainability of communities. 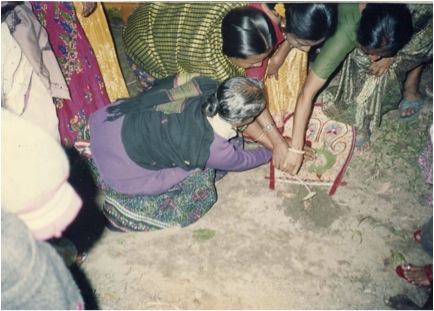 The photograph, by Santi Rozario, shows women in Noakhali, Bangladesh taking turmeric from the ground for a wedding ritual and replacing it with offerings. Rituals of this kind, with their close links to village agriculture and its ongoing sustainability, are common to all the different religious communities in Bangladesh, Muslim, Hindu, Christian and Buddhist. They are being increasingly replaced by new, globalised religious forms, identified with specific world religions and without an organic connection to the local community and its environment. We were interested in the consequences of changes of this kind.

The South Asian component of the research was carried out by Santi Rozario and Geoffrey Samuel. A workshop was held in Delhi in November 2007 and led to an edited special journal issue of Women's Studies International Forum, From Village Religion to Global Networks: Women, Religious Nationalism and Sustainability in South and Southeast Asia, edited by Santi Rozario and Geoffrey Samuel. . Other publications from the project are in progress.