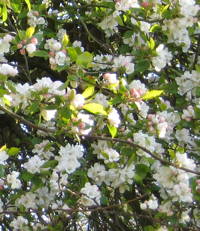 BAHAR is a network of researchers on the body, health and religion. BAHAR stands for the Body, Health and Religion. The word bahar also refers to the spring season, youth and vitality in Urdu, Farsi, Turkish, and other Asian languages. Our members are scholars of anthropology, religion, theatre, psychology, and other academic disciplines, as well as people working with the body in dance, movement and therapy, and creative artists in words, music, the visual arts and other dimensions. The BAHAR network has more than sixty members in many different countries including the UK, Australia, Netherlands, Germany, Belgium, Malta, and Canada. The network is directed by Geoffrey Samuel.

The BAHAR Research Group is involved in cross-cultural studies concerning the Body, Health and Religion and the interrelationships between them. Our orientation is essentially interdisciplinary and transdisciplinary. For BAHAR, the body refers to our psycho-physical being in the world as an embodied experience. Health refers to not just the absence of disease or recovery from physical trauma but the achievement of optimal human functioning at all levels. This involves also the relationship between individuals and the communities of which they form part, and between both and their wider environment. We see these relationships as needing to be understood in social and cultural terms as much as in those of biology or human ecology. Cross-culturally, the relationships between body and health, and between individual, community and environment have most often been expressed in a religious idiom, and the third major research component of BAHAR concerns the spiritual dimension of human life.

A list of some current and recent BAHAR projects can be found on the Projects page. These include work on Tibetan longevity practices, on Tibetan medicine, on Islam and young Bangladeshis in Bangladesh and the UK, and on the Taff Valley in South Wales.

The regular BAHAR seminar programme in Cardiff ended in 2012, and a final meeting took place in June 2014. The first Sydney BAHAR programme took place in April-June 2017. Geoffrey and Santi were away from Australia for most of the remainder of 2017. During this period, BAHAR co-organised two workshops, one in July 2017 with the Centro Incontri Umani in Ascona, Switzerland, and one in December 2017 with the Department for the Study of Religion at the University of Toronto. For further information, see the News and Events page or contact Geoffrey Samuel.

The Sydney programme continued in 2018, with a similar mix of seminars at the University of Sydney and film evenings at Geoffrey and Santi's house in Ashfield. There is a mailing list for BAHAR events in Sydney. If you would like to be placed on it, please contact Geoffrey (see below).