This major research project on young Bangladeshis in Bangladesh and in the UK was funded by an ESRC research grant for £348,636,50, 'The Challenge of Islam: Young Bangladeshis, Marriage and Family in Bangladesh and the UK'. It began in January 2008 and ended in March 2011. The project, which was carried out in conjunction with Cardiff University's Centre for Research on Islam in the UK, forms part of a wider programme of research initiatives within the BAHAR research group. Further details can be found at the ESRC's web page for the project. A 33-page report which describes some of the findings of the project can be downloaded here. A Bangla (Bengali language) translation of this report is also available. 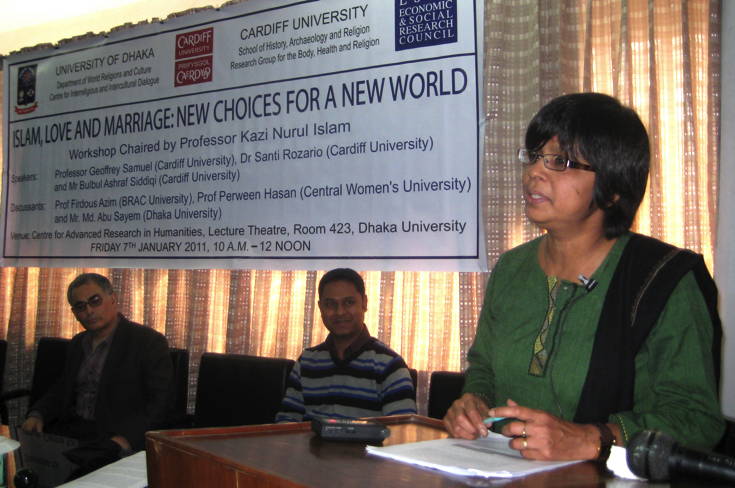 Public meetings were held at the University of Dhaka on 7th January 2011 and at Cardiff University on 23rd March 2011 to present some of the findings from this project. Audio podcasts, powerpoints and transcripts of the presentations from these events can be found here. 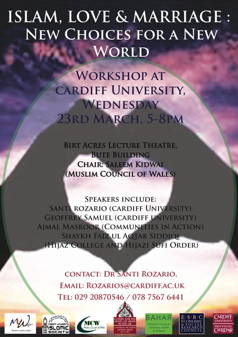 Marriage and the family are central but largely neglected areas in understanding contemporary developments in Islam. They have been little studied in comparison with more 'dramatic issues such as terrorism or veiling, but they have much to tell us about the appeal of modernist and Islamist ('fundamentalist') versions of Islam.

This project grew out of the belief that one of the main attractions of modernist versions of Islam is their ability to offer solutions to the problems faced by contemporary Muslim families in a rapidly changing world. In particular, they provide a model of personal identity that refocuses the individual's life around a vision of marriage, family and community. If we want to understand contemporary forms of Islam, we need to focus on transformations of marriage and the family as much or more than on political factors or religious imperatives. Our study examined how marriage and the family are changing among young female and male Bangladeshis within and outside Bangladesh. We were particularly interested in how young Bangladeshis before and after marriage think of themselves in relation to their future or actual husband or wife, wider family network and community, and to the role that both secular, Westernised images of the nuclear family and romantic love, and new forms of Islam, might have in forming their ideas.

Our project studied young people's attitudes to marriage, the family and personal relationships, and their ideas about their personal futures, in three main locations: rural Bangladesh (a village close to Dhaka city); urban Bangladesh (Dhaka city and Dhaka universities); and the Bangladeshi community in the UK (recent migrants, principally in Cardiff and London), through extended interviews and participant observations. We also examined relevant Islamic organisations, both through their writings and through interviews and participant observation. For an introduction to the project's findings, you can read talks given by Geoffrey Samuel and Santi Rozario in Cardiff in March 2011, along with a comment by Sophie Gilliat-Ray.

A conference panel was held in relation to this project in Sydney in December 2009, and an international conference was held at Cardiff in November 2010. A series of dissemination events took place in Bangladesh and the UK in January to March 2011. Please contact Santi Rozario for further information.

A listing of other outputs from the research project can be found here.